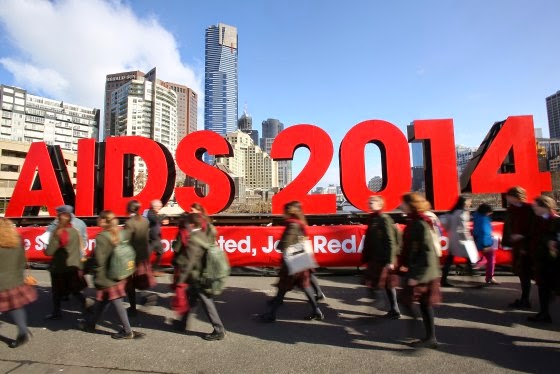 [UPDATE: 7/18/14, 11:52 AM EDT]
There was a pall over the 20th annual International AIDS Conference in Melbourne even before the crash of Flight MH17 in eastern Ukraine, which killed an estimated 100 delegates who were en route to the meeting. [Update: Later reports suggest that the number of delegates lost is much lower.]
In the past couple of years the vibrant showcase event—part serious science, part activist networking and carnival—has been headily optimistic, as HIV treatments improved and the possibility of a cure no longer seemed so far off.
“The mood is always an important part,” says Professor Mike Toole, an international communicable diseases veteran with Melbourne’s Burnet Institute who has been at the HIV/AIDS front line since the pandemic began some 30 years ago.
Toole remembers that the landmark Durban International AIDS Conference back in 2000 demonstrated to this eclectic crowd—a disparate crew of laboratory researchers, front-line health workers, activists and people living with the infection—their powerful potential.
It was in Durban that the commitment to deliver then-prohibitively expensive antiretroviral drugs to the world’s poorest populations ignited, and was carried through over the next few years by organizations like The Global Fund and the U.S. President’s Emergency Fund for Aids Relief.
The past two International Aids Society (IAS) meetings, in Vienna and Washington DC, have been buoyed by signals that a breakthrough was close, and the expectation was that the momentum would continue into Melbourne.
Then, barely a week ago, came a serious blow.
For over a year many members of the HIV/AIDS community had been pinning their hopes for a breakthrough on the so-called Mississippi baby, an HIV-positive infant that had apparently been cured through aggressive drug treatment soon after birth. But on July 10, news came, that the child was showing symptoms that the virus had returned.
Although there are other programs that indicate that it might be possible to eliminate HIV infection from a human body, the apparent relapse of the Mississippi baby “depressed people incredibly,” says Toole.
Then came yesterday’s tragedy.
For Toole and others HIV/AIDS experts the crash summoned up ghosts.
“It reminds me of the Swissair flight, New York to Geneva, when Jonathan Mann died,” he says.
Mann then the founding director of the World Health Organization’s global AIDS program was killed with several other researchers, including his wife Mary-Lou Clements-Mann, en route to AIDS meetings when the plane crashed in Canada, September 3, 1998.
“I lost five friends on that flight.”
In Sydney, at a pre-conference gathering on July 18, about 200 delegates spent the day closely monitoring Twitter and exchanging snippets of news, desperate for updates on who would and would not be joining them in Melbourne.
The word there was that a substantial number of the 100-plus delegates reported to be on the downed aircraft were part of the global network of activists and people living with AIDS.
With only a handful of names of the deceased confirmed by Friday, it’s difficult to measure the overall impact on HIV/AIDS research and advocacy.
But the loss of internationally renowned Dutch researcher Joep Lange—a former president of the IAS—would be a massive blow.
“It will have a big psychological effect,” says Toole.
“He was one of the leaders in the field.”
Another known casualty was Glenn Thomas, a British media officer working for WHO in Geneva.
Thomas was to be part of a media launch on July 20 revealing new tools to reduce harm to users of intravenous drugs.
He was also recognized as a particularly effective communicator on the links between HIV/AIDS and tuberculosis, says Toole.
(The risk of developing TB is up to 20 times greater in people infected with HIV, and in 2012, of the 8.6 million new cases of TB diagnosed internationally, 1.1 million were among people with HIV.)
“And the other hundred [on board]—we don’t know who they are, what it means.”
The annual AIS conferences are like no other medical gathering, says Professor Rob Moodie of the University of Melbourne, a former senior WHO official and longtime Australian public health specialist.
“You have this incredible mixture of scientists and clinicians, public health people, civilian organizers, human rights activists, people who have the virus … who all have some sort of sense of ownership and collective leadership.”
The energy and collaborations of these gatherings have helped drive the huge advances achieved in understanding and responses to HIV/AIDS in a relatively short time.
“We learned more about HIV in the first 10 years than we did in a century with other diseases,” says Moodie.
The involvement of grassroots activist groups—as well as lab researchers—has been key to that success.
MH17’s toll would not only be measured in the loss of medical expertise, but of advocacy, understanding and hard-won personal experience.
“There is a black cloud on this conference,” says Toole.
Still, Toole was confident that delegates would be driven to achieve as much as they could in memory of their colleagues.
He welcomed the move by the City of Melbourne on July 18 to cancel fireworks that had been scheduled to kick off the conference, but was disappointed that that’s night fixture in the Australian Football League competition—to which AIDS2014 delegates had been given tickets as part of the cultural program—did not pause for a minute of silence.