While the EU has managed to truly integrate its policy-making in some areas, migration remains too divisive. 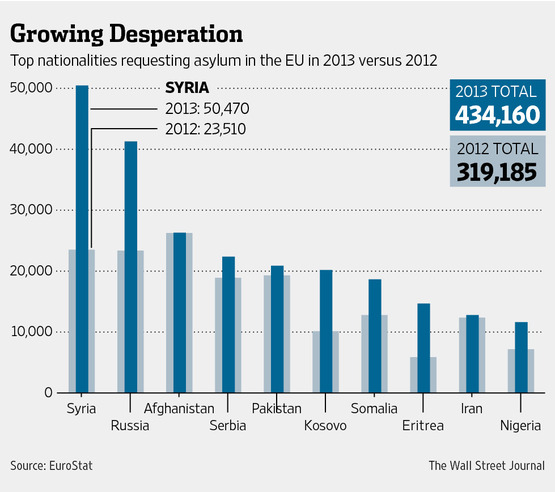 BRUSSELS—
Thursday marked two milestones in the refugee crisis in Europe's neighborhood: six months since more than 355 African migrants drowned on their way to the Italian island of Lampedusa, and the millionth Syrian refugee registered in Lebanon.


Both are reminders that migration remains among the European Union's toughest issues, one that divides the bloc even as humanitarian disasters claim lives by the thousands just outside its borders.

Smuggling, Survival, and Hope in Lampedusa 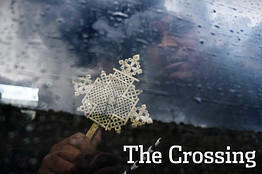 Almost no EU country has shown a desire to significantly increase its intake of Syrian refugees. Sweden, the only EU state to have promised Syrians permanent residence, has recently sought help from other EU nations, pressured by the economic and political costs of the influx of refugees.

Meanwhile, countries along Europe's Mediterranean and southeastern borders have been trying to get other nations to bear more of the cost of managing and protecting refugees, but with little success.

Some 435,000 people applied for asylum in the EU last year, a 36% jump on 2012. Syrians topped the list and almost three times as many Eritreans tried to escape their country as the year before, according to Eurostat, the EU statistics service.
One out of 10 refugees applied for asylum in Germany, the most populous EU country.

Migrants face vastly different conditions depending on where they end up in the EU.

Spain and Greece take on thousands of illegal migrants each year and governments there say they are doing their best on limited budgets to accommodate them.
But the two countries have also taken steps to fortify their borders.

Spain announced earlier this year that it would earmark an extra €2.3 million ($3.2 million) to increase security at Ceuta and Melilla, two Spanish enclaves in Morocco.
In February, Spanish police admitted using rubber bullets to shoot at African migrants trying to swim to Ceuta, and police have also pushed back migrants from a fence that surrounds Melilla, to the dismay of EU institutions and human-rights organizations. 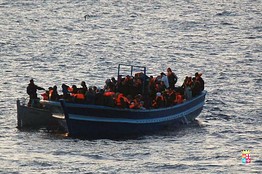 Greece erected a 10-kilometer-long wall along its northern border with Turkey to deter undocumented migrants from crossing into its territory.
Dozens of refugees—mainly Syrians—have drowned on their way to Greece just in the past few weeks.

Meanwhile, Bulgaria has struggled to accommodate the thousands of Syrian refugees arriving there and the situation has threatened to cause a political crisis.
The government received emergency aid from the EU, but human-rights organizations describe the conditions for asylum seekers as squalid.

The European Commission, the EU's executive arm, has been trying to rally national EU governments to commit more funds to manage migration and to take on more refugees.
But it has stopped short of calling the situation a crisis, or of defining what constitutes one.

Because of that, the EU hasn't activated its refugee-crisis program, which was created when the bloc opened its doors to thousands fleeing the wars in the Balkans in the 1990s and hasn't been used since.

Instead, following the Oct. 3 Lampedusa shipwreck the commission convened a task force to look at immediate steps that could be taken to ensure fewer people drown trying to get from North Africa to Europe.
Its few conclusions, presented in early December, have only partly been implemented. (Explore an interactive on smuggling, survival, and hope in Lampedusa.)

European and African leaders meeting in Brussels on Thursday said they'd do more to manage migration but didn't spell out exactly what.

European Council President Herman Van Rompuy has said leaders will discuss how to reform the EU immigration system at their meeting in Brussels in June, but several EU officials say no more than pledges to act, rather than a concrete plan of action, should be expected.

"We commit to undertaking concrete actions to respond to challenges of migration and mobility at the appropriate level in a spirit of partnership, shared responsibility and cooperation,"
EU and African leaders said in a joint declaration at the end of their two-day meeting here.

To some observers who saw the EU-Africa summit as a prime opportunity to present a concrete plan, the declaration was a disappointment.

"The EU, in cooperation with Africa, must radically shake up its approach and wake up to the need for real action over words in order to protect people and save lives,"
Nicolas Beger, a director at Amnesty International in Brussels, said in an email.
"More search and rescue is needed, safer routes must be created, and the outsourcing of European migration control policies to non-EU countries must end."

While the EU has managed to truly integrate its policy-making and rules in some areas like competition policy, migration remains too divisive.

Poorer countries, especially those along the bloc's borders, want the richer ones to accept a system that distributes migrants across the bloc.
They also want much more EU help in guarding their borders. Richer states largely reject these ideas.

The dysfunctions of the current arrangement mean that migrants end up paying smugglers to travel illegally across the EU to reach countries where they are most likely to get jobs and have good prospects for asylum.

The policy vacuum created as countries struggle to agree leads to profits for the smugglers, trouble for the migrants and disgruntlement in both richer and poorer EU states.

Still, given how divisive migration has become in national politics across Europe, it's hard to see how EU member states can set aside their differences to reach a new compromise that works better, or less badly, for all.

—Laurence Norman
contributed to this article.


Write to Matina Stevis at
matina.stevis@wsj.com