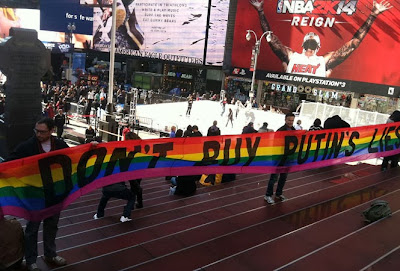 The Olympic movement got a rainbow surprise when a dozen or more protesters took on a Sochi Games promotional activity in the heart of Times Square on Tuesday 30 Okt 2013.

“Homophobia has got to go!” bellowed more than a dozen protesters who unveiled a rainbow banner reading,
“Don’t Buy Putin’s Lies.”

The U.S. Olympic Committee set up a mini ski slope in the tourist magnet in midtown Manhattan on Tuesday to celebrate 100 days until the Sochi Games.

The very public spectacle achieved its goal of attracting the attention of the throngs of passers-by.

It also allowed the group Queer Nation New York to call for a U.S. boycott of the Olympics from an adjoining sidewalk.

“The USOC and the international community should not legitimize Russia’s violations of fundamental human rights by holding the Games in that country,”
said Duncan Osborne, a member of Queer Nation, an LGBT rights groups.
“Russia has placed itself well outside the bounds of global human rights standards and no international event should be held there.”
The USOC’S official stance is that it disagrees with the law but that a boycott is out of the question.

The organization is seeking clarity on what will and won’t be regarded as violations of the IOC rule against using the Olympic stage to make political protests or demonstrations.

Meanwhile, in Sochi, with IOC President Thomas Bach in attendance, President Vladimir Putin promised Monday that gay athletes and guests at the Winter Games will feel at ease.

The International Olympic Committee has also said it received assurances from the Russian government that it will respect the Olympic Charter, which prohibits discrimination of any kind at the games.